Esther (Lulu) Eggeling, pictured below in 1994, attending the Esperance Primary school centenary, where she cut the cake at the schools 100 year celebrations. Mrs Eggeling was 90 years old at the time. Living out of town, Esther had to board in town. “My schooling had some breaks in it when I was needed at home on the farm at Dalyup.” 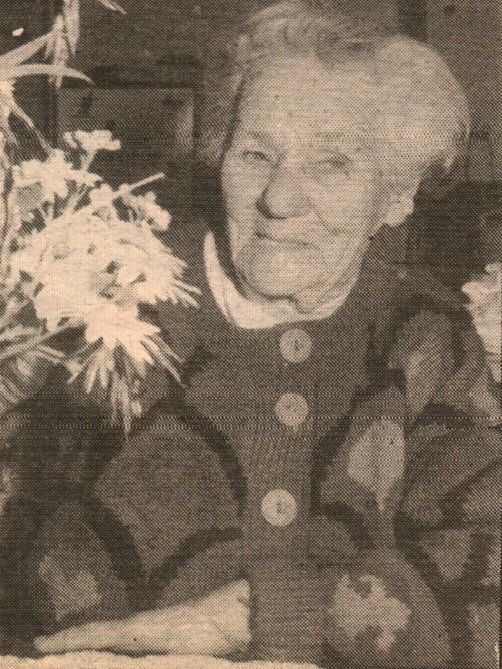 Extract of transcript of audio tapes belonging to EBHS for the Esperance Museum, with help from funds from Lotterywest.

M.A. This is our newsletter, and this is what Dorothy’s written.
“Rowse one hundred years, 1896 to 1996. William Rowse emigrated from England and operated a general store with his wife Caroline, who came from a small farming property in South Australia. They met at Black-flag a small mining town near Kalgoorlie and married.” Is that alright so far?
ELE. That’s good yes.
M.A. (Reading from newsletter)
ELE. I didn’t know that.
DA. I got that out of John Rintoul’s book.
M.A. Doesn’t seem right to take ten hours to go twenty miles does it? “The story started for us with a toss of a coin to decide whether they would shift to either Perth or Esperance, the south won, and they packed all their goods and chattels plus building materials on a horse and dray and headed for the coast. William started work with the Dempster family here as cook in the Esperance area. It is not known if this is when he first saw the Dalyup River and fell in love with the land but he decided to take up farming in the area in 1896, took lots 25, 26, 27 and built the family home, shown on photograph in Don Voigt’s book ‘Old Esperance’. Dalyup is situated approximately 45 kilometres west of Esperance and has good fertile soil. Their immediate need was fresh water and they had to depend on soaks, as the Dalyup River was salty, and Dempster’s had an outstation in the area, and pioneer settlers led a lonely and strenuous life. They had to face isolation and deprivation in the bush going for weeks without seeing anyone. It was here that Esther Lulu Rowse was born in 1904 the first of four children, second born was a brother who died at birth and is buried on the property. Two sisters were born later. The Rowse family started an orchard on lot 25, planting grapes, stone fruit and almonds.”

ELE. Plenty, lovely big orchard.
M.A.  “Lulu remembers picking up bags of almonds as a child.” Can you remember that long ago?
ELE. What?
M.A. Picking up bags of almonds.
ELE. Yes I can, of course, yes well and truly.
M.A. “Produce was taken to Esperance by horse and cart, the journey sometimes taking up to ten hours.” That’s pretty slow isn’t it?