“My father was a general storekeeper in Maitland, South Australia and had a farm three miles out of Maitland which had two cottages for workers who worked in the property (approx. 1000 acres) on Yorke Peninsula. Horses and wheat (and ponies) were established on the property and it had beautiful fruit trees.”

Francis James Daw married Polly Charlotte Couzens. On the 1st July 1894 Francis Daw and son Edgar arrived on the Helen Nicoll. Francis Daw travelled to Perth and Albany but decided that Esperance would be a good place to settle.

“There was nothing but sand dunes when we arrived in Esperance and there were camels lying in the street, and Afghans in their robes that used to take goods from Daw’s store to Norseman. For the first years our merchandise was sent from Adelaide, small boats, steamers and sailing vessels all about 100 ton or so. My father established a store in Andrew Street in about 1894 and brought the stores from South Australia with him to Albany. The following year the family came on the Wollamai direct to Esperance. We attended school in a little tin shed in Dempster Street, between the Post Office and Sinclair’s house. It was in the middle of Dempster Street but the street was not named then. A Rd. Baker taught at the school and imbibed quite heavily, and Mrs Daw decided that I should return to South Australia and attend a private boarding school there.”

“My Mother was of medium height, dark hair, and was a clergyman’s daughter from England. My mother used to drive a little phaeton with two ponies, fawn and cream and they were called Primrose and Daisy. They had long cream manes and tails. My mother used to dive around with a school teacher, Miss Provis and collect money for the church building fund ( Anglican), which was to be a wood and iron roofed building with wooden and pine board lining. I remember we donated one pair of brass vases.”

‘My father took up the first land at the Dalyup (about 25 miles from Esperance). My father could not keep away from the land and he kept a man out on the farm in the cottage there, we had a 5 acre orchard and vineyard and the fruit was beautiful. He also bred horses later which were driven over to Katanning where the land was booming in the Great Southern (medium draught horses0. He also had a crop for chaff and turkeys and poultry. We would start off in the early morning to transport the fruit in by spring dray over heavy sand track, no made roads, and would not reach Esperance until dark.

When we came to Esperance Mr and Mrs Bostock were managing the Dempster property and we would walk all the way down to the Dempster homestead where Mrs Bostock would hold Sunday school. I remember the homestead had dark polished floors and rugs scattered on them. I thought there was a stained window very beautiful, in the dining room.
I remember dances were held in a very large room of the Sinclair’s’ old homestead in Dempster Street. We used to also dance at the Bijou every Friday night and Edward Hannett (Ned) was a wonderful pianist in those days, and later Capel Hannett (married Fred Bow) was a pianist for the dances.

We also had silent films in the Bijou and it was used for roller skating also. Capel Bow could paint very well and several of her paintings are now owned by Mr Sharp of Esperance. (Capel Bow was taught painting by Gertrude Daw who later becomes Mrs Synnot of Esperance). Gertrude learnt from Professor Linton in Perth and some of these paintings are still in Esperance and some owned by Mrs McGinn. Miss Provis who was a school teacher in Esperance after Dr Baker, was brought over from Adelaide in a semi-private capacity to teach the Daw children, and later became a school teacher’s assistant (teacher) to Mr Hart the first head master of Esperance and it was she who first taught Gertrude Daw to paint. A painting by Miss Provis is still owned by Mr Ray Daw.

There was a flat topped wagon (no seats at all as was popularly known) and was horse drawn and it ran on a tram line from the Castletown jetty to the Esperance jetty but it was not used very much except by the children. I remember there was a Castletown dance there once, It was little used at all. The clock for the town hall was in Dempster Street, later in front of the fire station”.

This story was in collaboration with Mr Len Daw brother of Mrs McGinn 5th September 1974.

The Esperance District Honour Roll 1914-1919 have the names of F. C. Daw and K.J. Daw  where among the many Esperance men who enlisted to go to World War One. 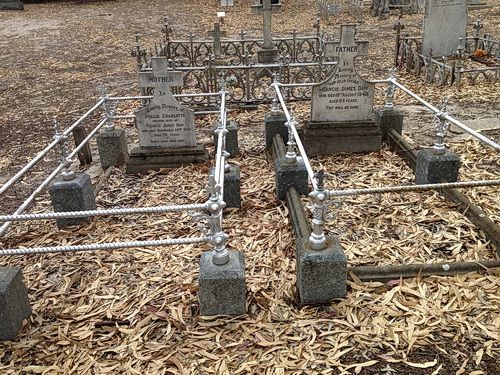